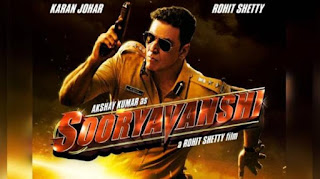 Release date: 24 March 2020 (India) Trending
Director of sooryavanshi 2020: Rohit Shetty
Production companies: Dharma Productions, Reliance Entertainment, Cape of Good Films
Music director: Tanishk Bagchi, S. Thaman, Amar Mohile
Producers of sooryavanshi 2020 : Rohit Shetty, Karan Johar
Before ‘Suryavanshi 2020’, the 1993 bomb blasts were seen in these films
The date for the trailer out of director Rohit Shetty’s most anticipated film Suryavanshi 2020 has come out. At the same time, the trailer of the film was shown to the media on Saturday. This showed that the film is based on the 1993 Mumbai bombings.
Akshay Kumar in the film Suryavanshi 2020
The trailer of Akshay Kumar and Katrina Kaif’s upcoming film ‘Suryavanshi’ will be released on 2 March. At the same time, on Saturday in Mumbai, film director Rohit Shetty showed the trailer of his film to some of his close friends and media persons. The trailer revealed that the story of ‘Suryavanshi 2020’ is based on the 1993 Mumbai bomb blasts. In this bomb blast, which happened on Mumbai and the pain suffered by the victims, it appeared many times in Bollywood films, in different ways.
Bollywood has tried many times to take the 1993 blast incident and its pain on the big screen through the story and bring it to the general public. Movies based on blasts have made the audience think and cry. Many filmmakers have also shown how the people of Mumbai stand back again after fighting terror and live their lives with new zeal.